#MovingforClimateNow is awarded with a Climate Leaders Award 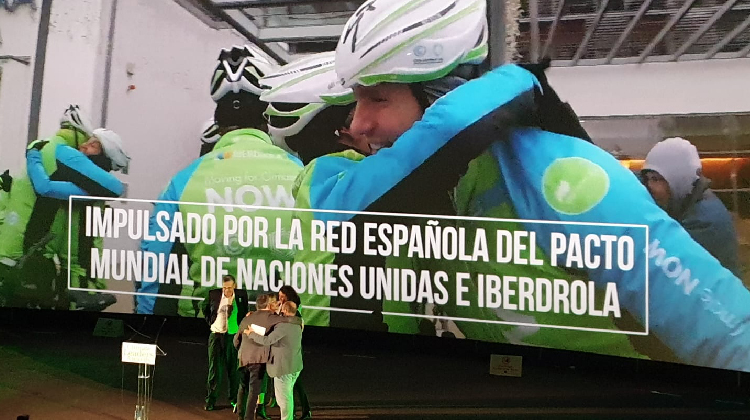 The Climate Reality Project, the initiative against climate change created by Al Gore, former Vice President of the United States and Nobel Peace Prize winner, has recognized the #MovingforClimateNow project with a Climate Leaders Award. Specifically, the initiative carried out by the Global Compact Network Spain and Iberdrola has been awarded because of their contribution to raise awareness among the society about climate change.

The vice-president of the Spanish Global Compact Network, Victor Viñuales, and the Director of Marketing and Development, Marta Tomás together with Carlos Sallé, Director of Energy Policy and Climate Change at Iberdrola, were in charge of collecting the award during the ceremony that took place on 25 October in Madrid.

The other winners of these awards are Greta Thunberg and the Fridays for Future movement (in the under-18 personality category), model and actor Jon Kortajarena (public personality), the Spanish Green Growth Group (company), Clinomics – Barcelona Provincial Council (emission reduction and adaptation project), ISGlobal (NGO), the Basque Government (local or regional administration) and Ciclogreen (start up).

The jury, chaired by Álvaro Rodríguez, general coordinator of The Climate Reality Project in Spain, was made up of environmental experts such as Alicia Tórrego, from the Conama Foundation, Cristina Monge from Ecodes, the sustainable mobility expert Antonio Lucio, the meteorologist Mercedes Martín de Antena 3, Sergio de Otto, from the Renovables Foundation, Luis Jiménez Herrero, president of Asyps, and Carmen Domínguez, from Mykado Media.

The Climate Reality Project has more than 230 climate leaders in Spain and more than 18,000 worldwide. Through conferences, climate leaders help to explain what climate change is and the urgency of taking action to stop it. Over the past 12 years, more than 30,000 people in Spain have attended their talks.

UN Global Compact @globalcompactWomen have been at the frontlines of the #COVID19 pandemic, making up 70% of the health care and social workforce g… https://t.co/weyHHz9xl6 12 18